emilylick.com has also had its pictures updated from 2005-12-30 through present. Enjoy. 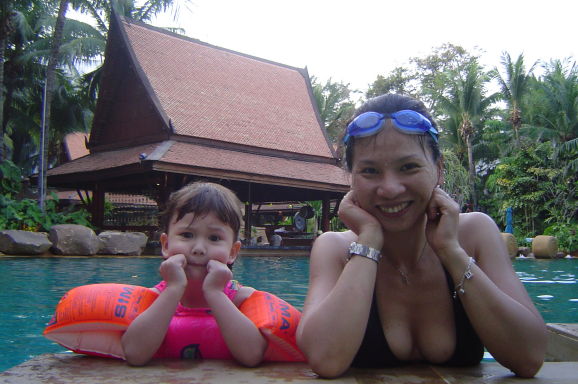 (Ok, so this makes two pictures of the day.)

Construction is going well. US equipment order is in. Signs are about to go up. Getting a “coming soon/now hiring” banner done to increase visibility.

New hangup is with the business license. Because the entire building is all one address, they don’t want to give a restaurant license that would also cover the upper floors. The accountant is working on finding a workaround which may involve partitioning the building into two separate addresses. There’s a possibility that it may delay the opening. 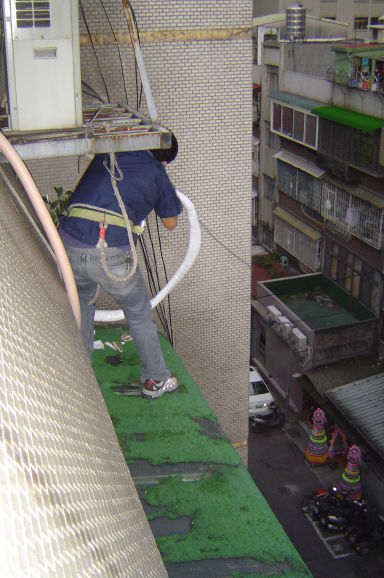 On Monday we had a pretty big rain storm and after Emily came home I noticed there was water dripping down onto the sofa from one of the light fixtures. I pulled the fixture out of the ceiling and found the dripping was coming from one of the air conditioning pipes. Fortunately it was not coming from the piping itself, but the insulation wrapped around it. The insulation had a small nick in it and the water was dripping out from there.

Our AC is the “split type” where there’s a small inside fan unit, and then the main compressor is located outside on the side of the building. I followed the piping out where it ran up to a compressor on the 6th floor of the building. On the 6th floor, I leaned out the window and saw that the insulation on the piping had been eaten off. And by eaten off, I mean literally. It looked like some rodent had decided the foam insulation made a good dinner.

So, we called in an AC repair guy to look at it yesterday and this afternoon he and his buddy came to do the repairs. He took the windows out, tied a rope to the ceiling support and jumped out the window onto the top of the awning over the greenhouse window that runs along the front of the fifth floor. He added a new foam covering on top of the bundle of pipes, taped it all up and caulked up the ends for good measure.

All I know is, I sure as hell wouldn’t go hanging around outside a 6th floor window even if you paid me, but this guy did.

On Sunday I took Emily to play at Tom Dragon in the Neihu RT-Mart while Maggie did some shopping there and at Costco next door. Emily had a lot of fun there, mostly playing the the ball room part.

It’s really warming up here now, so Emily had trouble sleeping until the AC was turned on in her room. Today it’s raining a bit so it’s a bit cooler than yesterday. It seems like we hardly had winter this year.

Yesterday I learned that the owner of Alleycats Pizza opened up a full Italian restaurant called The Italian Job with some partners. So tonight we headed down to Lishui Street to check it out. Their kitchen was a bit slow, but the food was good and the design of the restaurant is quite nice. Then Maggie nipped downstairs to Alleycats to get some pizzas to go while Emily and I headed to the book/toy store nearby. Then we spent some time over in the park on Yongkang Street and bought some Fried Fish Soup (you may have noticed I like this one) at a Tainan food restaurant. Then we went to pick up our pizzas and went home. It’s nice to have so many good choices in the Yongkang/Lishui Streets area, but now there are TOO MANY. We hardly ever go to the original Ding Tai Feng anymore, and we skipped the vietnamese place and Ice Monster today too. Now we’ll have to actually decide where to eat when we go down there.

Tomorrow my mother-in-law is going to Japan for a visit and next week my nephew Jason (he changed his English name to Oliver but I still call him Jason) is going to be visiting from Hong Kong.

Demolition started this morning, stripping out the old walls, front window, ceiling and scraping down the floors inside and front walkway.

Meanwhile R.L. helped me repair a sick computer back in Santa Clara. One of the 1gb ECC memory modules went bad.

Emily and I saw a neat looking lizard in the park.

Since the Valerie Plame story has been a frequent topic of this blog, I thought I should say something about this week’s news. Libby now says that not only was the classified information he leaked authorized by Cheney, he now says that Bush authorized the leak as well. He goes on to say that it was fine to do this because he talked to White House counsel who advised him that the president can defacto declassify material by authorizing its release. This seems to be the Kissinger defense, from when Kissinger reportedly quipped that he didn’t leak, he declassified.

So Libby’s defense now seems to rest on the argument that there was no crime in leaking the information. Never mind that everyone in the White House has apparently been lying about who leaked the story, if this argument is true. And never mind that Libby lied about it under oath. I just hope that the voters have the sense to toss out any politician who still defends these liars and/or criminals this fall.

All right. It looks like the insurance issue is all sorted out now. It was supposed to be done yesterday but that deadline slipped. I made a complaint to the local Subway office which leaned on the insurer some. I’m not sure if that helped or whether they really did just get it, but the insurer reported it was done shortly thereafter. The issue with the insurance has been holding up a lot of things so it’s good to finally have this be nearly out of the way.

Construction is starting tomorrow morning with demolition of the old walls and floors.

I also forgot to mention that in the park just before we left Tainan we came across too large toads hopping around near the trees. Emily had some fun chasing them to make them hop.

If anyone is looking for a job…

Sorry if that sandwich makes anyone hungry.

We actually didn’t make it to Gaoxiong at all. The first went down to the old Chikan fort in central Tainan to look around. I’d been there before but it’s still neat to look around. While we were there, there were some military fighter jets doing some training overhead and I managed to get a couple decent photos as they flew over. The Japanese sidewalk restaurant we were supposed to go to on Friday night was across the street and though we thought it was only open for dinner, it was just opening up when we left the fort, so Maggie and Emily and I ate lunch there while the rest went elsewhere nearby.

Bonita and Ilona had bought return bus tickets for 2:50pm but they decided to stay rather than go after all, so Elly and my mother-in-law used those tickets instead. The rest of us went to the other old fort in Tainan, Anping fort which is near the waterfront. First Emily took a ride on a small train set a vendor had set up, while I watched and the others looked around the market outside.

I decided not to go into the fort as I’d been there too and wasn’t as interested in going again, so Maggie and Emily and I set out to find someplace to sit and wait for them. We saw a guy carrying two large lizards who was soliciting people to take pictures with them. He took an interest in Emily and when he heard she wanted a cracker to eat he darted off to a nearby stand to help her buy some crab flavored crisps. Then we walked out to the main road and Emily saw a guy selling fresh squeezed orange juice and wanted to get some. She’s getting so she can buy things herself now.

I asked the juice guy where the beach was but the answer was a bit too complex so Maggie talked to him in Taiwanese for a bit. The developed beach area was a few kilometers away so we set off to get a taxi to take us. In Taipei you can just about go out to the curb and flag a taxi down in less than a minute most of the time, but in Tainan there’s not as many taxis around. We eventually got one and set out.

When we got to the entrance of the beach area Maggie noticed a famous restaurant called the Five Cent Driftwood House across the street, so we went in there to chill out for a few hours having tea and beer and snacks. The restaurant was made out of various random pieces of wood logs and was pretty inventively put together. In any case, it was a nice cool air conditioned place to kick back.

Ilona and Bonita joined up with us and after they had their rest we headed back to the previous night’s Fried Fish Soup restaurant (on Hai An Road near Bao An Road, for the next time you’re in Tainan) where I wolfed down two bowls of soup for dinner. Then we headed off to the bus station to buy our return tickets. The tickets we got were for about an hour and a half later so we headed to a nearby park for a while where Emily spent a lot of time playing on the playground.

This week I’ve ordered the local equipment and signed a contract for construction. I also went and talked with S.P., another American who has opened up two Subway shops in Taipei, and who was able to give me a lot of good advice. He was given as a reference by the construction guy I chose, and I had intended to just ask him about that, but he ended up chatting with me for almost an hour and a half about lots of good things to know about the business.

On funny thing happened to me when I was in the Landis Hotel bakery yesterday. My conversation went something like this:

This apparently delighted one of the other customers who said my Chinese sounded very good. My Chinese isn’t actually that good, but since I buy a lot of french bread, that conversation is pretty much down pat. She then proceeded to ask if I know any Taiwanese and said I don’t, which is mostly true, so she tried to teach me some. When she was doing this I surprised her by throwing in a couple of Taiwanese words that I do know. I really don’t know Taiwanese but I do know stuff like “sorry”, “it’s nothing”, “unbelievable”, “i don’t want”, “i’m full” and “crab”. (“crab” sounds like Jim in Taiwanese so I get teased about that sometime.) Anyways, it was kinda fun.

The only other interesting occurrence this week was another earthquake, this time a 5.7 in the middle of the night. Felt like someone bumped into my bed:

I’m still waiting for the damn insurance policy. It was supposed to be done today.