One problem with laptop computers is that they aren’t really designed to be used as ‘laptops’. At best you’re going to end up with your leg getting a bit warm, at worst you will overheat your CPU and sterilize yourself. My current laptop computer has a Pentium M chip, and I run Speedswitch XP to make sure it throttles down the speed when not under load, so it actually runs fairly cool.

However, it has one design feature which is a bit annoying. The vent for the CPU fan is on the bottom of the computer. It’s also over towards the right hand side on the bottom, which means that if you actually use it on your lap, you are almost guaranteed to block the vent, risking overheating the CPU.

I’ve looked at several of those ‘lap saver’ devices which have come out in the past couple of years, but never found one that I liked. They come in sizes that don’t match my computer. They come with all kinds of extra crud like USB hubs and extra fans (again venting out the bottom… duh) that I don’t want and jack up the cost. And more often than not they look stupid. Really, all I need is some flat board to put the computer on so that there’s room for the air coming out of the vent to circulate.

For a while I was using one of Emily’s over sized children’s picture books, but it wasn’t quite the right size either, and probably wouldn’t stand up to extended use. Still, it did work OK. I took the measurements of my laptop and committed them to memory and then left a little note in my subconscious to be on the lookout for hard flat things that size.

A few weeks later I was in IKEA and my subconscious finally screamed out “Look! Over there! Flat hard things that size!” just as we were passing by the cutting board section. Sure enough, there were two cutting board styles that were almost exactly the right size. The first was a plastic one at TW$49 each (US$1.50), but it was a bit too thin and bendy. The second choice was a set of two wood cutting boards for TW$99 total (US$3.00). The bigger of the two in the set was just the right size, and sturdy enough as well. So into the shopping bag it went.

Let’s look at what was found: 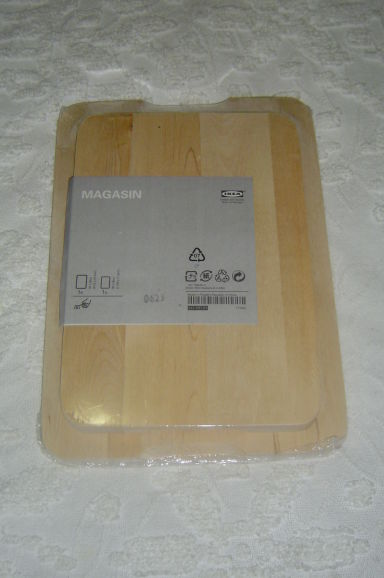 A set of two cutting boards. 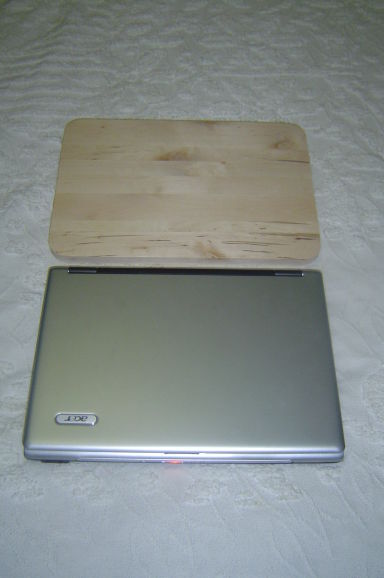 The big one is about the same size as my laptop. 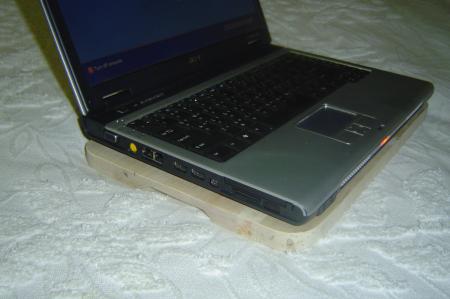 One thought on “IKEA MAGASIN Hack”