(Wutip turned out to be a bit of a dud.)

Yesterday and today I’ve gotten back into doing more walking for exercise.

Today Maggie and Emily are going to the US to stay with my Dad in Santa Barbara for two weeks. I’m not going because someone needs to stay and make sure my business is running smoothly. The last two times I left (Singapore and US) a significant amount of money went missing each time. We now have video surveillance systems in place in both stores but I’m still a bit nervous about leaving again until I’m more confident that things are OK. Besides I also have a lot of things on my TODO list that I can get done once things are a bit quieter.

I’ve updated Emily’s 2007 Album for 2007-03-24 through 2007-08-05. One thing I’ve been playing with recently is making panoramas by stitching multiple pictures into one large panorama image using Autostitch. Here is one from tonight (well last night by the time this is posted) of the atrium of Core Pacific City Living Mall. 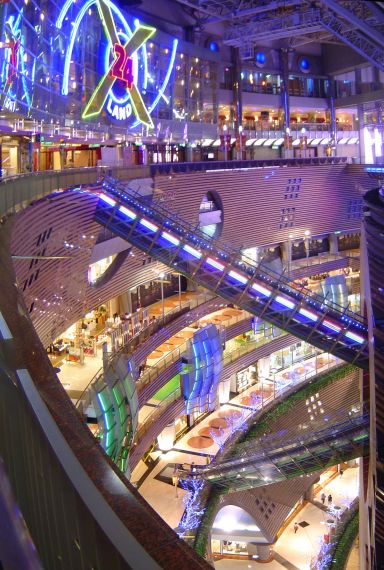 I’ve also finally posted an album from my family’s 1978 Soviet Union Trip for a bit of history. Here’s a sampling: 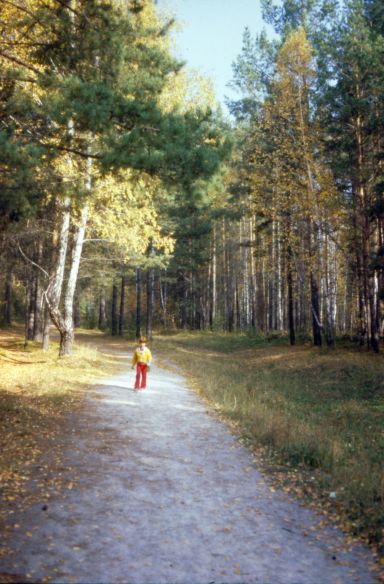 Last night Maggie and I finally got around to seeing the new Harry Potter Order of the Phoenix movie. We went to see the IMAX 3D version at the Miramar in Dazhi. As usual the experience of seeing a film in IMAX is pretty incredible. Only the big finale, from when Harry, Hermione, Ron, Luna and Neville fly off to the Ministry of Magic to the end of the fight with he who shall not be named was in 3D, but that 3D part itself was pretty cool. They use a polarized light system for the 3D so you have to wear polarized glasses to see it. I highly recommend going to see it in IMAX 3D if you have a chance, even if you’ve already seen the normal film version.

Afterwards we went to the Lailai Soy Milk shop near there for snacks. I remember going there ages and ages ago when that area was no more than a cluster of buildings at a big intersection. Now the whole area is filled with new tall buildings.

I wanted to add its RSS feed as a subscription in my Newsgator Online RSS Reader but got an error message trying to do so. This was perfect fodder for a comment added to the 4/29 Truth site:

Newsgator Online is also in on the conspiracy to suppress the 429truth.com web site. They will not allow the 429truth.com RSS feed be subscribed to using their service, giving the message: “Error: Subscription could not be added. Please check the URL and try again.” Here is a screenshot of what happened when I tried to subscribe:

This is yet another indication of just how much the government is controlling which sites the multinational corporations will allow us to access.

(I really did get an error trying to subscribe but I’m thinking it’s more probably a temporary error and not deliberate.)

EDIT: A few hours later I was able to add the feed without any problems.

So, I passed the written part of the driving test. Still working on the road test parts. Before you laugh at me, go back and review those videos of the test in the last post.

Sunday April 1, we went by High Speed Rail to Tainan for early Tomb Sweeping for my great-grandfather-in-law, grandmother-in-law, and father-in-law. Instead of 5 hours by bus, it was about 1:45 hours on the HSR. I had to give driving directions to Maggie’s father’s grave since she never remembers. I had fried fish soup for lunch (everyone else had other stuff).

In the afternoon we headed to Kending by bus via Gaoxiong. HSR doesn’t go further than Gaoxiong and the bus to Gaoxiong was faster anyways, since the HSR stations are far outside of downtown in both Gaoxiong and Tainan. In Kending we stayed at the Chateau Hotel which was right on the beach. We went a short walk into town for dinner where we sampled night market fare and had some Thai food.

Tuesday we spent all day hanging out on the beach or in the pool.

Wednesday the weather turned cold again but it was still just warm enough in the sun to enjoy the beach a bit more until we had to make our way back home. We took the bus back to Gaoxiong and stopped off at the Liuhe Night Market where I again had my favorite fried fish soup. The Liuhe Night Market place makes it best, even though the Tainan one is supposedly more authentic. Then we took the train up to the HSR station and then back to Taipei on the express train in just 1:40 instead of 6 hours by bus.

Weather has been pretty crappy in Taipei since then. That and the real Tomb Sweeping 4-day holiday of Thursday, April 5 through Sunday April 8 really put a dent in business. Things have been slowly warming up though, so that and some sunny weather should be good for business. Please! Please!

Last night Emily was playing around and dropped a heavy 10 meter metal tape measure square on her big toe and busted the toenail. Lots of blood and drama but she seems to be OK today.

Next week I’m going to Singapore April 15 though April 18 for a Subway meeting. My flight on Sunday leaves 7:40am which means leaving the house at 5:00am. And since the buses aren’t running that early, that also means hiring a taxi to go to the airport. Ugh, too early.

I’m still hoping to make it back to the US at the end of this month. In related news, I’ve finally got the majority of my stuff off of tcp.com and onto my hosting accounts. I just may be able to get the last remnants off by the end of this week.

I also finally got the finalized versions of the VIP discount cards done for my shop, both English and Chinese versions. I found a nice heavy stock green paper that’s a bit lighter than “Subway Green” but pretty nifty looking. Microsoft Word has some decent Business Card Templates that I was able to use for layout, and they even have the ‘A4 sizes’. I got a small laminating machine, business card sized lamination sleeves, a small paper cutter and rounded corner snippers. I tried printing on my laser printer at home, but the toner tends to flake off the rough surface of the heavy stock paper I got. The HP inkjet printer at the restaurant works great though, and once printed, cut, and laminated they look really nifty.

For any of my readers in Taiwan, if you’d like a discount card, email me your mailing address (Chinese preferred) and let me know if you’d like the English or Chinese version and what name you’d like on it.

I haven’t had a chance to blog for a while, so here’s a couple of videos to tide you over for a while.

ysabellabrave sings What A Wonderful World:

The infamous ‘Bus Uncle’ video from Hong Kong, now with Chinese and English subtitles:
(Not worksafe if anyone you work with understands Cantonese.)

Here are two videos which just possibly may make your head explode.

Jerk It Out by Mark Leung (music by Caesars)

We also had a 40 minute power outage at my first restaurant tonight. Dunno what happened but that side of the street was all dark. The good thing about this was that I found out some of the emergency lights were not set right, so got them working correctly.

hostgator.com suspended my new account about two hours after I redirected the Robert Anton Wilson site to their servers. I guess they don’t like accounts getting quite that much traffic shortly after being created. Fortunately I noticed right away and after a quick call they ‘verified my credit card’ and reactivated the account.

The site is doing about 1gb an hour in traffic and NewsGator pegs it at the #5 most blogged about topic today.

It’s been a bit hectic, so here’s some updates.

Maggie’s shop got broken into in the middle of the night last Saturday night/Sunday morning. They popped open the two back doors. They had crappy deadbolts where the bolt was only about 3cm long and the rest of the mechanism was just a slender rod. Suckers popped right out. She has security through Tokai so the alarm went off and guards responded fairly quickly, but the burglars were gone by then. They didn’t manage to get anything for their trouble though. The security company also called Maggie and then she dragged me out of bed at 2am to go over to check things out. The security guard was covering the back door when we arrived but hadn’t gone in and hadn’t called the cops. Maggie insisted the cops be called before going inside. A second security guard showed up and decided he was brave enough to go in to check things out. A bit later the cops showed up to take a report. In case you are wondering, it’s about impossible to get a door replaced on a Sunday.

The new shop is going well. We need to work on a more efficient work schedule, but this is also the slow season for Subway in Taiwan. Also need to work on some store marketing because the old owners didn’t do anything in that area. However the store paperwork system the old owner designed is some hot stuff and makes the weekly reports a breeze. Need to implement that in the new store. I promised to keep everything the same for one month so just planning now what to do. We also decided to close for three days for Chinese New Years and work a reduced schedule for one week.

Today I found out that one of my favorite authors, Robert Anton Wilson died on Thursday morning in California. If you recall from a previous post asking for financial help, this was not unexpected. Thanks to everyone who donated a few months back, he was able to stay at home and get good medical care through the end.

I also host the Official Robert Anton Wilson Website on my computer, so one hint I got that something had happened was seeing my poor little SDSL line pegged to the limit with 99% of the hits for that one host. I temporarily redirected the main page to his blog on Blogspot, but it turns out that he uses some of his site’s images on his blog, so that didn’t really help any.

I was able to temporarily move the host to a free trial account I had through 1and1.com but that only has a 5gb/month traffic limit which would only last at best 12 hours with the traffic it was getting. I was thinking of upgrading the account there, but they don’t have the best reputation for reliability. Later I found a good deal on a hosting account through hostgator.com and setup on there. They seem to get good reviews, and have good rates. Also they have a promo to take $9.94 off the first month when using promo code ‘whreviews’ and since the account that I was looking at was $9.95 per month that means the first month is 1 cent with no obligation. If they work out OK I’ll probably move most of my stuff there after I shut down tcp.com at the end of next month.